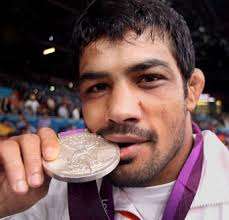 Sushil Kumar Solanki(born 26 May 1983) is an Indian freestyle wrestler. Competing in the 66 kg weight division he won the 2010 world title, a silver medal at the 2012 London Olympics and a bronze medal at the 2008 Beijing Olympics , which made him the only Indian to win two individual Olympic medals.

His 2008 Olympic medal was second for India in wrestling, and the first since Khashaba Dadasaheb Jadhav's bronze medal at the 1952 Summer Olympics.In July 2009, he received the Rajiv Gandhi Khel Ratna - India's highest honour for sportspersons.On 3 October 2010, Kumar handed the Queen's Baton to Prince Charles in the Queen's Baton Relay for the 2010 Commonwealth GamesOpening Ceremony.Sushil won the gold medal in the 74 kg division at the 2014 Commonwealth Games.