Bollywood actor Kangana Ranaut's upcoming film 'Thalaivii' has hit another roadblock after some of the biggest multiplex chains in the country seemingly decided to not accommodate the film's theatrical release on September 10.

Taking to her Instagram handle on Saturday, Kangana posted a Story expressing her disappointment over the decision.

She wrote, "Multiplexes have diffent rules when it comes to big heros films, they released Radhe simultaneously on ott and theatres . They have released Master with 2 weeks window, releasing Hollywood movies with simultaneous OTT release in US, but refusing to screen even the South of THALAIVII which have a 4 weeks window. @pyrcinemas official @inoxmovies the system makes sure that no woman rises and then complains why don't we have women super stars bringing audiences to theatre on her own like men do ... " 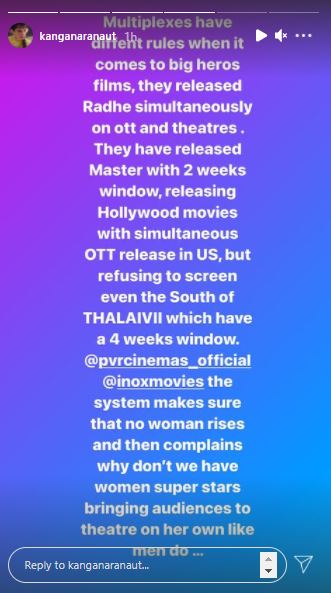 In a subsequent IG Story, she added, "@pvrcinemas_official @inoxmovies says they are on ventilator but even then bullying harassment and ganging up seems their top most priority.... Simply explains why they are in this state in the first place .... Hope better sense prevails content makers have too many options to showcase their work but we need to multiplexes support to save them ...." 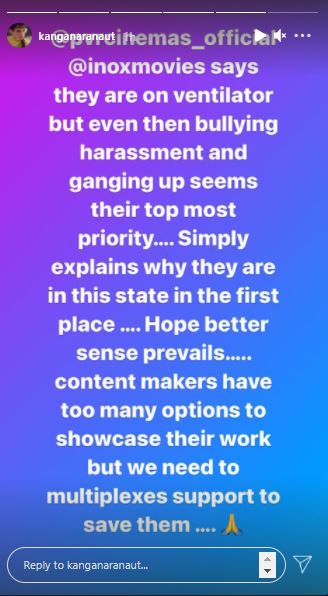 Earlier, on Friday, in a lengthy statement, the 'Queen' actor had initially shared her plight with her fans regarding the entire scenario. Stating that she was "heartbroken", Kangana had urged the multiplex owners to help each other in these trying times.

She wrote, "No films are choosing theatres, very few and very brave like my producers @vishnuinduri @shaaileshrsingh are compromising on huge profits and letting go off exclusive streaming options only for the love of cinema.. in these times we must support each other and not bully or arm twist, it's our fundamental right to recover the cost of our film which we did, we may have two weeks window for Hindi version but for south, we have four weeks window yet multiplexes ganging up on us and stopping our release there as well."

"This is unfair and cruel in these testing times when major territories like Maharashtra are also shut... Please let's help each other in order to save theatres," concluded Kangana. 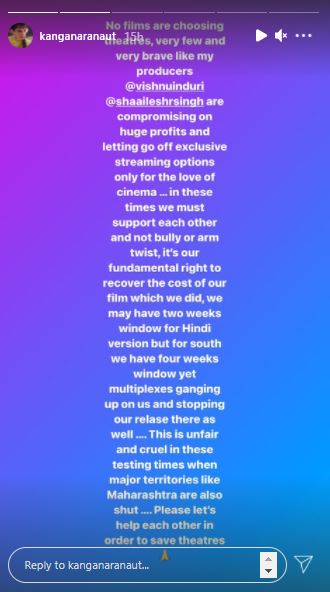 As per reports, theatre chains are unhappy with 'Thalaivii' makers as they demand at least a four-week gap between its debut in theatres and on OTT platforms. The multiplex chains are reportedly refusing to screen the Hindi version of the film saying the window to its Netflix premiere is too narrow.

Touted as one of the biggest Bollywood releases this month, Kangana's 'Thalaivii' has set high hopes as the film's trailer managed to fuel the anticipation among audiences. Post 'Bell Bottom' and 'Chehre', 'Thalaivii' would be the third Bollywood project to get an exclusive theatrical release in India.

The movie marks Kangana's second biopic after the 2019 film 'Manikarnika: The Queen of Jhansi'. Helmed by A.L Vijay, 'Thalaivii' revolves around the life of late politician Jayalalithaa. In the film, Kangana will be seen essaying the titular role of Jayalalithaa.