Year-ender 2021: From Vicky Kaushal-Katrina Kaif to Varun Dhawan-Natasha Dalal, a look back at dreamy celebrity weddings The follow-up year to a tough 2020 wasn't exactly the kind of "normal" that everyone was hoping for, but it did give us some headlines that didn't have to do with the COVID-19 pandemic, thanks to the beautiful celebrity weddings.

Celebrity weddings have been trendsetters for a long time now, be it giving us new goals for destinations or breaking away from the stereotypes. This year's wedding season has been high on creativity and some unusual practices.

Social media has been flooded with the most dreamy pictures of celebrity sweethearts, and as we bid adieu to this year, let's revisit the celebrity weddings that became the talk of the town in 2021.

1. Vicky Kaushal and Katrina Kaif: The two, who never publically confirmed their love affair, tied the knot on December 9 in a private and lavish ceremony at the Six Senses Fort Barwara in Sawai Madhopur, Rajasthan.

Their wedding made headlines for all the strict measures they were taking to keep their privacy intact. There was news about a no-phone policy and plans to shoot down drones. But once the wedding got over, the couple mesmerized everyone with their breath-taking photographs from the festivities. And it's safe to say that the wedding of the year certainly was that of Katrina and Vicky. 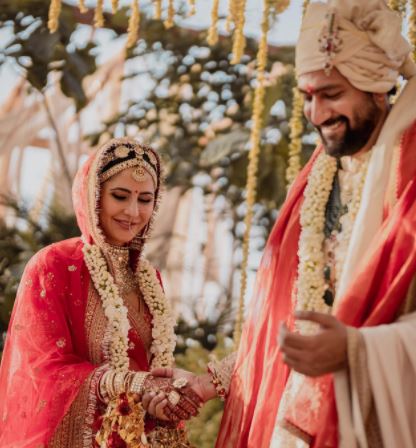 2. Patralekha and Rajkummar Rao: The much-in-love couple, who dated for a long time, got married on November 15 in an intimate ceremony at The Oberoi Sukhvilas Spa Resort, Chandigarh. The duo shared beautiful pictures on their respective Instagram accounts after the wedding.

Patralekhaa's wedding veil grabbed many eyeballs as it had a beautiful message of love inscribed on it. Reportedly, the beautifully carved veil read out a Bengali mantra that spoke of passionate, true love. It read, "Amar poran bhora bhalobasha ami tomae shomorpon korilam," which translates to "I submit my heart filled love to you." 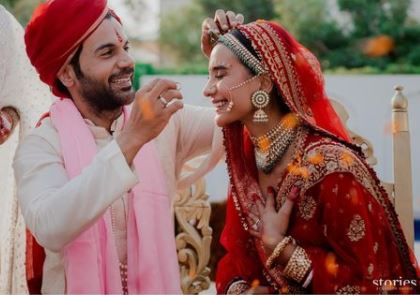 3. Varun Dhawan and Natasha Dalal: The couple, who were in a relationship for many years before tying the knot, exchanged wedding vows in Alibaug's The Mansion House at a private ceremony on January 24. Varun later treated his fans to some stunning pictures from their wedding on his Instagram handle.

The couple got married in the presence of close friends and family members, keeping COVID-19 protocols in mind. The wedding also had a no-cell phone policy to ensure complete privacy. 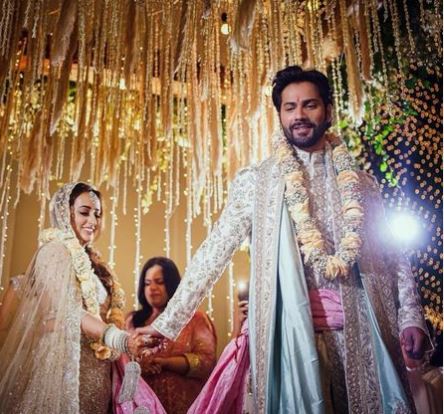 4. Yami Gautam and Aditya Dhar: On June 4, the duo said their 'I dos' in an intimate wedding ceremony in Himachal Pradesh. Aditya is best known as the director of the 2019 hit movie 'Uri: The Surgical Strike', in which Yami starred as an undercover RAW agent. The couple's wedding announcement on social media took everyone by surprise. 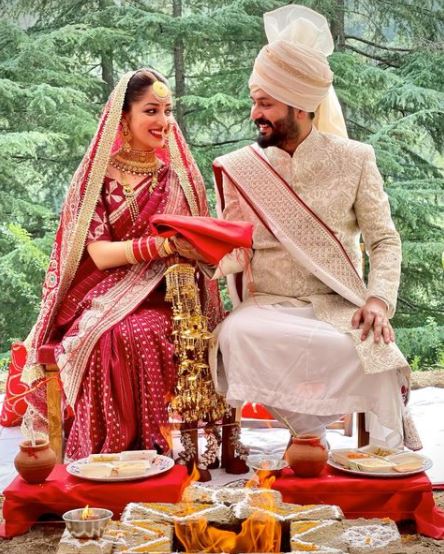 5. Dia Mirza and Vaibhav Rekhi: The two tied the knot on February 15 in an intimate wedding ceremony. The venue was Dia's apartment complex's garden in Mumbai. After the wedding, the actor shared pictures from the ceremony on Instagram.

The actor, who is also an environmental activist, revealed that the wedding was organised in a completely "sustainable" manner with no plastic waste.

The couple made headlines for several reasons including distributing sweets to the media persons standing outside the venue and having a woman priest solemnise their wedding. 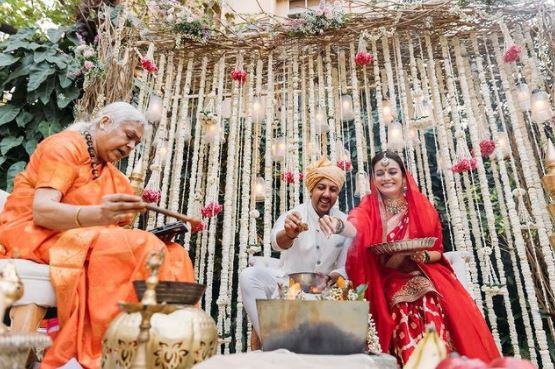 6. Rhea Kapoor and Karan Boolani: The duo got married on August 14 at the residence of Rhea's father, actor Anil Kapoor in Mumbai's Juhu area. Rhea celebrated her big day with close family members and friends as she tied the knot with her longtime beau. The wedding was an intimate affair with attendees including Sonam Kapoor, Arjun Kapoor, Anil, Sanjay, Janhvi and Khushi Kapoor, among others. Rhea later shared dreamy pictures of the private wedding ceremony. 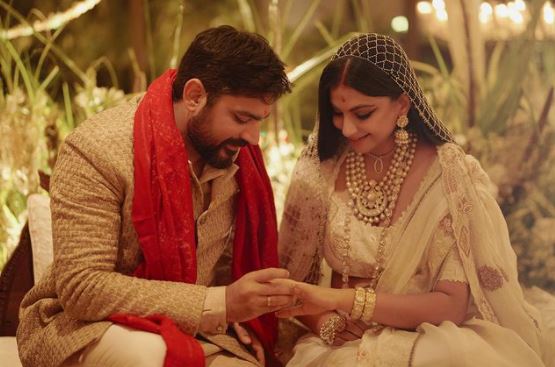 7. Paris Hilton and Carter Reum: The stunning couple tied the knot at her late grandfather Barron's extravagant Bel-Air estate on November 11 and the star-studded affair was a sight to see. The lavish wedding had the likes of many famous celebrities including Emma Roberts, Kim Kardashian and Bebe Rexha. Paris also posted pictures from her dreamy wedding festivities on her Instagram account. 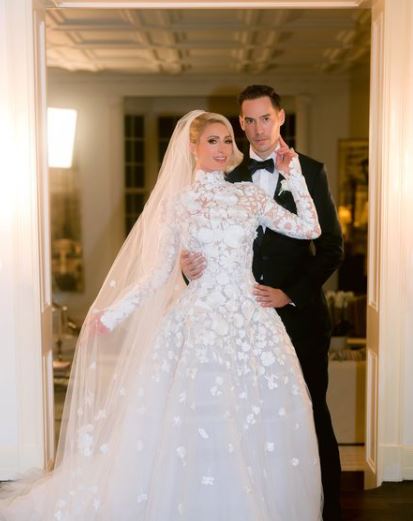 8. Ariana Grande and Dalton Gomez: The couple, who began dating in January 2020, secretly tied the knot at the '7 rings' singer's Montecito, California home in May. The couple celebrated their special day with less than 20 people at their intimate wedding ceremony. 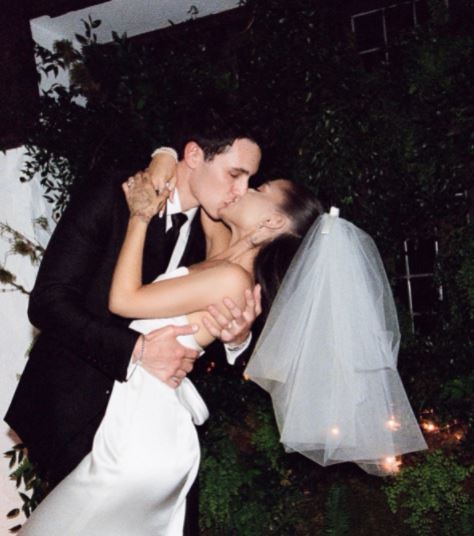 9. Gwen Stefani and Blake Shelton: 'The Voice' lovebirds said their 'I dos' on July 3 at Shelton's Oklahoma ranch. About 40 guests attended the intimate wedding, including their 'Voice' pal Carson Daly, who officiated. The singers began dating in 2015 and announced their engagement in October 2020. The duo also treated their fans to dreamy wedding pictures from the festivities. 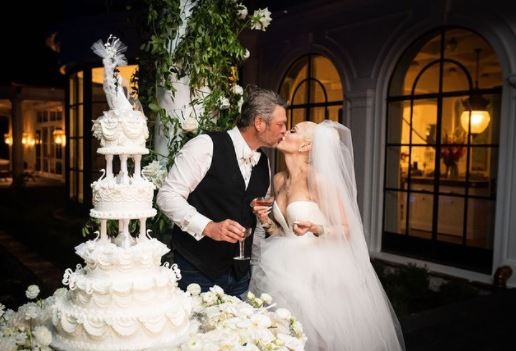 10. Lily Collins and Charlie McDowell: The two tied the knot on September 4 in Colorado. The 'Emily in Paris' star, who looked radiant in a beautiful long-sleeved gown, described the ceremony as "magical". Emily, the daughter of rock legend Phil Collins got engaged to Charlie -- son of Malcolm McDowell and Mary Steenburgen in September last year. 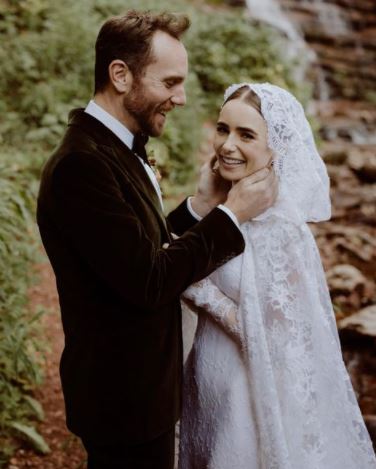 We wish these couples a happy married life and can't help but wonder which celebrity weddings will make headlines in 2022!