Sidharth made his Bollywood debut with 'Humpty Sharma Ki Dulhania' in 2014, starring Varun and Alia Bhatt in the lead roles.

Taking to his Instagram handle Varun shared a picture in which Sidharth can be seen posing with Alia and Varun at a promotional event for their film.

Along with the picture, Varun wrote, "Rip brother u are loved by so many and u touched so many with ur kind heart and beautiful personality. Today heaven has gained a star and we have lost one. My deepest condolences to the family and loved ones." 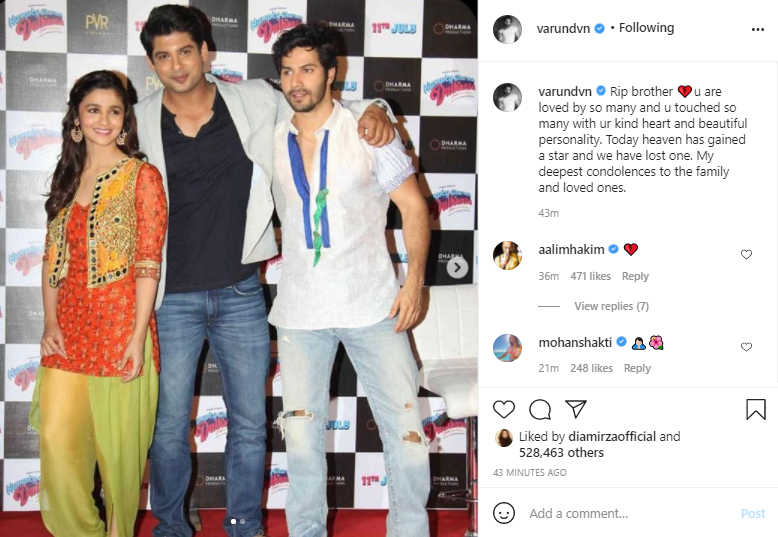 The sudden demise of Shukla shocked the Indian film and television industry. Sidharth was 40 when he breathed his last. Mumbai's Cooper hospital confirmed his death to ANI.

The actor last appeared on reality shows 'Bigg Boss OTT' and 'Dance Deewane 3' with Shehnaaz Gill. The late star rose to fame with the hit TV shows 'Balika Vadhu' and 'Dil Se Dil Tak'. The actor was also seen alongside Diljit Dosanjh in the 2018 movie 'Soorma'.

Sidharth Shukla Demise: Epic dialogues of BB 13 winner that will always remain fresh in our heart
NEXT STORY