While the whole nation has been mourning the demise of legendary singer Lata Mangeshkar, netizens are reacting to a viral picture of superstar Shah Rukh Khan and his manager Pooja Dadlani, offering their last respect to the megastar.

A picture has been doing rounds on the internet where superstar Shah Rukh Khan and his manager Pooja Dadlani could be seen offering their last respects to the megastar whose last rites were conducted at Shivaji Park on Sunday in Mumbai with full state honours. 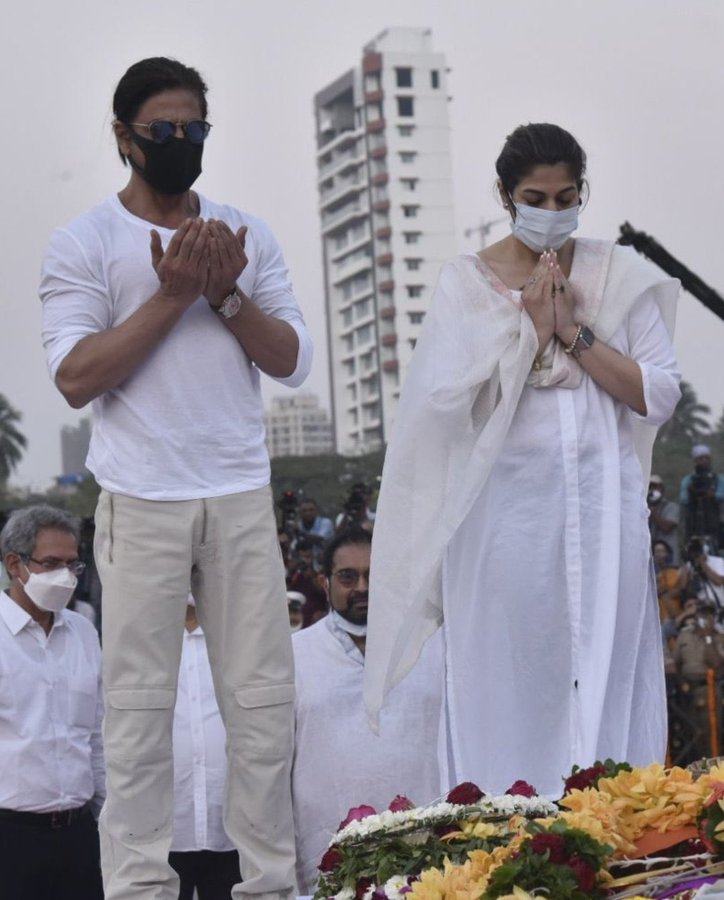 In the viral snap, Khan could be seen raising his hands in dua, while Dadlani could be seen folding her hands in order to pay homage to the celebrated singer. Khan also paid her a floral tribute and touched her feet after reciting the dua. 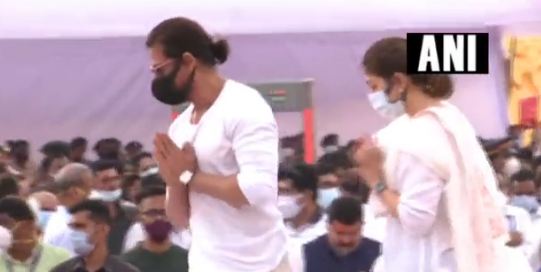 Fans, who were touched by his gesture, started hailing the snap as 'a picture of secular India'.

"Some Bigots can't even digest this beautiful sight of uniting India! Truly #LataMangeshkar ji was that human who United people alive and continued doing after passing away! @iamsrk #ShahRukhKhan is one of that breed Spreading love," a twitter user wrote.

"There's no one like #ShahRukhKhan. There won't ever be. Your hatred makes us love and respect him even more. Shame on you!," wrote another.

A third fan wrote, "Proud to be a fan of Shah Rukh Khan. That's it that's a tweet."
Another tweeted, "Best example of secular India."

The picture was indeed a 'positive picture' that went viral on social media on Sunday, but a section of people also criticized the 'Om Shanti Om' star for allegedly 'spitting' on the mortal remains of Lata Mangeshkar, after reciting his dua.

"Can't believe SRK spitted on #LataDidi's body while paying his "last respect" to her... Even if your Mazhab teaches you this, practice this at your home or with your own people..." a Twitter user wrote.

A second user wrote, "Shame on SRK who spitted on #LataDidi's body while paying his "last respect" to her."

Meanwhile, many fans came countering the act as "a religious practise after reciting dua (prayer)."

A user tweeted, "@iamsrk reading a dua & blowing on #LataDidi 's mortal remains for protection & blessings in the next journey. It's a part of Prayer."

"You aren't just a bigot but pure evil to twist a dua said in reverence of the departed soul to spread hatred. Think about it people, will we let the evil win? #LataMangeshkar #ShahRukhKhan," a second user wrote.

"Some people are filled with hatred that they are misconstruing an act of a genuine dua. Why can't they leave their Islamophobia for 1 sec atleast? Infact you all are spitting venom out there. So stop!! #ShahRukhKhan," a third user wrote.

Another wrote, "Another Propaganda has been [email protected] reading a dua & blowing on #LataDidi 's mortal remains for protection & blessings in the next journey. It's a part of Prayer.Can't comprehend the level of bitterness of those saying he is spitting. SHAME #ShahRukhKhan #LataMangeshkar"

For the unversed, this was the first time SRK made a public appearance after keeping away from the public eye since late last year following the arrest of his son Aryan Khan in a drug case.

Meanwhile, speaking of the Bharat Ratna awardee who passed away at the age of 92, Lata Mangeshkar was cremated at Shivaji Park on Sunday in Mumbai with full state honours.

The vehicle in which her body was taken to the stadium was completely decorated with white flowers and also had a massive photo of hers. The coffin in which her mortal remains were placed was also wrapped in tricolour as the army marched along. For the final rites, Prime Minister Narendra Modi came to pay his last respects.

Eight priests dressed in white arrived to conduct the final rites. Blocks of sandalwood were placed at her body while the priests chanted the mantras.

She was admitted to Mumbai's Breach Candy hospital on January 8 after she was diagnosed with COVID-19 and pneumonia.

Two-day national mourning will be observed in memory of Lata Mangeshkar, government sources informed on Sunday.