Amid a war of words between the Centre and the Punjab government over the security breach of Prime Minister Narendra Modi during his visit to the state on Wednesday, state Chief Minister Charanjit Singh Channi has hit out at the Bharatiya Janata Party with a quote from the former home minister and freedom fighter Sardar Vallabhbhai Patel.

"The one who is concerned more about his life than his duty, should not take a big responsibility in a country like India," tweeted Channi on Friday with a picture of Sardar Patel who is also the BJP icon. 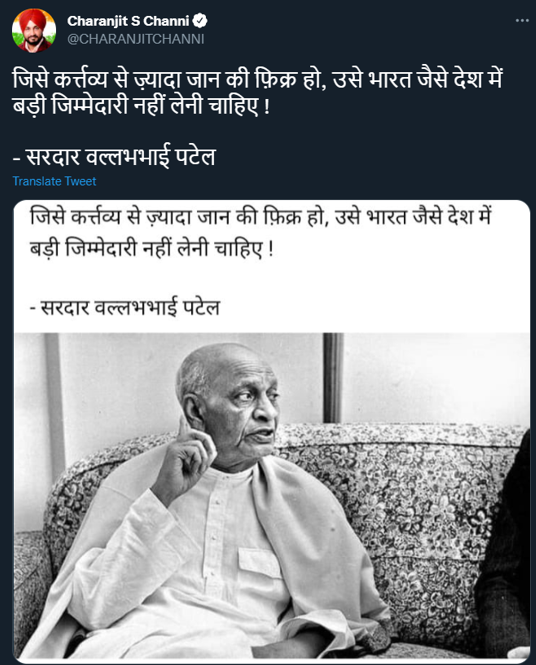 The war of words between the two parties began after the Prime Minister's convoy was stuck on a flyover for 15-20 minutes due to road blockage by some protestors about 30 km away from the National Martyrs Memorial in Hussainiwala.

Notably, the Prime Minister was scheduled to visit Ferozepur in the poll-bound state and lay the foundation stone of multiple development projects worth more than Rs 42,750 crore.

Meanwhile, the Ministry of Home Affairs (MHA) on January 6 constituted a three-member committee to enquire into the serious lapses in the security arrangements during Prime Minister Narendra Modi's visit to Punjab's Ferozepur on January 5, which led to the exposure of the VVIP to grave security risk.

"The three-member committee will be led by Shri Sudhir Kumar Saxena, Secretary (Security), Cabinet Secretariat and comprising of Shri Balbir Singh, Joint Director, IB and Shri S. Suresh, IG, SPG. The committee is advised to submit the report at the earliest," the ministry said.

The Home Ministry has also sought a detailed report from the Punjab government over the security lapse.

The Home Ministry in a statement had then informed that it asked the state government to "fix responsibility for this lapse and take strict action".

However, the Chief Minister refuted the allegations of a security lapse during PM Modi's visit.

"We had asked them (PMO) to discontinue the visit due to bad weather conditions and protests. We had no information of his (Prime Minister Narendra Modi) sudden route change. There was no security lapse during the PM visit," Channi said.