Tokyo Olympics gold medallist Neeraj Chopra might have won hearts with his performance at the showpiece event, but footage from moments leading up to the finals of the competition show Neeraj on the lookout for his javelin.

The video doing the rounds on social video further shows the Indian athlete spotting his javelin in the hands of Pakistan athlete Arshad Nadeem and then rushing towards him to take it back before his first attempt on the historic night.

While the turn of events leading into the throw didn't hamper Neeraj's prospects of winning the gold, many fans questioned the motive behind Nadeem picking "someone" else's javelin.

"In this video, Pakistan's Arshad Nadeem caught red handed with #NeerajChpora's Javelin. Why would anybody pick someone else's Javelin just before the throw? What was he even thinking?" one of the users tweeted. 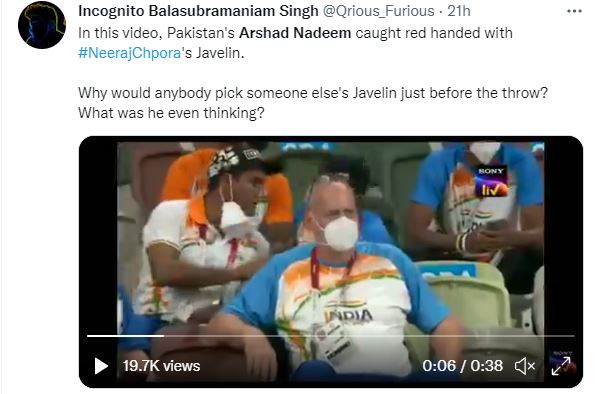 Another user slammed Arshad Nadeem for his "unprofessional" behaviour.

Neeraj threw 87.02 metres in his first attempt but bettered his record in the second essay with a distance of 87.58m in the mega event to pick the gold.

The Indian athlete said his focus remained on his training despite the threat posed by the COVID-19 pandemic and the stringent protocols that was put in place.

"Current times are far from normal but everyone has to go through it (COVID-19 tests) so I feel it has now become a part of our life. Focus remains on training but need to follow all precautions," Neeraj told ANI after returning to India.

Asked if his performance during qualification boosted his confidence further as he qualified with his first throw itself, the athlete said one cannot take things for granted in sports.

"Every day is different, as sometimes an athlete who doesn't throw well in qualifying rounds, does well in the final. In the final everyone gives 100 per cent. I just had in mind that I would give my best and I did," Neeraj said.