Actor Kriti Sanon received a plethora of birthday wishes as she turned 31 on Tuesday. However, it was 'Baahubali' star Prabhas whose wish caught attention.

Prabhas shared a captivating picture of Kriti on his Instagram handle and penned down a birthday note for her, appreciating her performance in their upcoming film 'Adipurush'.

The caption reads, "Many many happy returns of the day @kritisanon. What you bring to the sets of #Adipurush is so precious!"

Thanking his co-star, the birthday girl also hopped on to Instagram and replied to Prabhas in the comments section of the post. She wrote, "Thankss Prabhas! hoping to see u soon in the next schedule," using red heart emoticons. 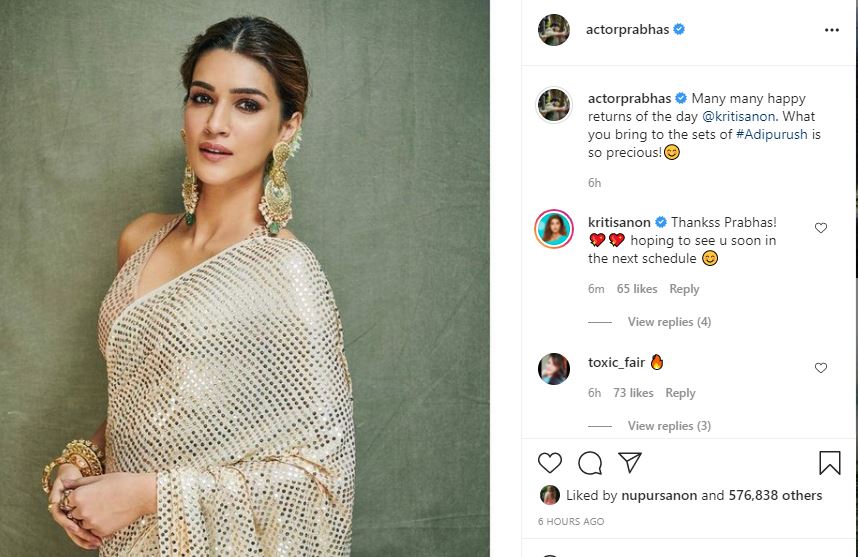 For the unversed, 'Adipurush' is an upcoming mythological movie directed by Om Raut. Apart from Kriti and Prabhas, the movie also features Saif Ali Khan and Sunny Singh.

The film which is currently eyeing August 11, 2022, for its release had started production back in February.

Produced by Bhushan Kumar, Om, Prasad Sutar, and Rajesh Nair, the film will be released in Hindi, Telugu, Tamil, Malayalam, and Kannada.