Kareena turned 41 on Tuesday and was showered with love and a plethora of birthday wishes from the Indian film fraternity and her fans.

However, it was Priyanka Chopra's birthday wish to the 'Jab We Met' actor that was extra noticeable as both the superstars had a long Bollywood tale of friendship and estrangement with each other.

Taking to her Instagram Story, Priyanka posted a throwback video featuring her with Kareena from a dance reality show in which the latter was a judge earlier.

In the boomerang video, the two divas can be seen posing for a kiss with each other. Sharing the video, Priyanka wrote, "Happy Birthday Gorgeous." 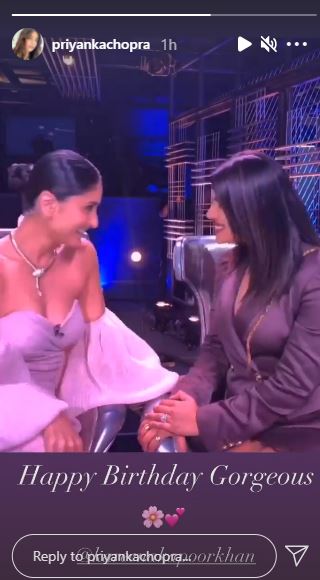 Kareena and Priyanka's long time beef is well-known in the B-town. But, in an earlier 'Koffee with Karan' episode, the 'Fashion' star addressed the same and said they both "never spent enough time with each other. By the time we did, we really started to get along."

Meanwhile, on the work front, Kareena will be seen in the highly anticipated film 'Laal Singh Chaddha'. The movie also stars Aamir Khan with whom Kareena had last shared screen space in the film '3 Idiots'. Actor Mona Singh will also be seen in the movie.

The film went on floors last year and was shot across 100 locations in the country. It is currently scheduled to release this Christmas.