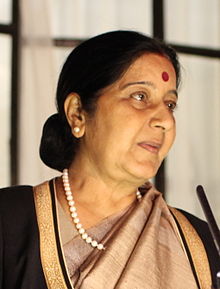 Sushma Swaraj About this sound pronunciation is an Indian politician, former Supreme Court lawyer and the current Minister of External Affairs of India, in office since 26 May 2014. A leader of Bharatiya Janata Party, Sushma Swaraj is the second woman to be India's Minister of External Affairs, after Indira Gandhi. She has been elected seven times as a Member of Parliament and three times as a Member of the Legislative Assembly. At the age of 25 in 1977, she became the youngest cabinet minister of north Indian state of Haryana. She also served as 5th Chief Minister of Delhi for a brief term in 1998.

In the 2014 Indian general election, she won the Vidisha constituency in Madhya Pradesh for a second term, retaining her seat by a margin of over 400,000 votes. She became the External Affairs Minister in the union cabinet on 26 May 2014.

Prev Page 2 of 24 Next
fresh CATCH