As heavy rains and floods wreak havoc in Telangana, Congress leader Rahul Gandhi has urged the party workers in the state to provide all possible assistance in the rescue operations.

"My thoughts are with our brothers and sisters in Telangana facing massive floods. I appeal to Congress workers to provide all possible assistance in the rescue operations. There are still warnings of more heavy rainfall. Please take care and stay safe," the Wayanad MP tweeted. 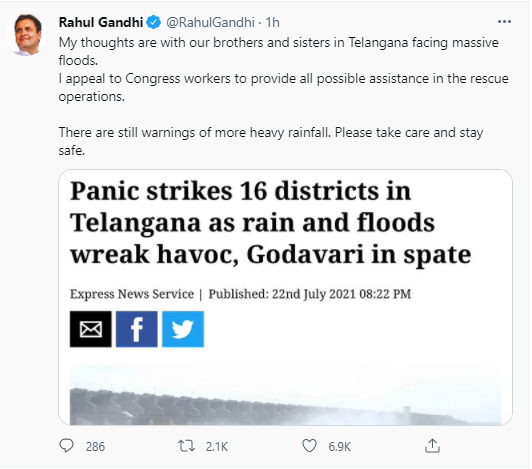 "Red alert in three districts including Kumuram Bheem, Jagtial, Warangal, and Orange alert in nine districts of the state," said the IMD.

NDRF teams have also rescued 7 people stranded in an old age home due to flash floods in Savel village of Nizamabad district.