Bollywood filmmaker Karan Johar, who will be marking his return to the director's chair with the upcoming film, 'Rocky Aur Rani Ki Prem Kahani', on Saturday, shared a BTS photo from the movie's set.

Karan took to his Instagram handle and posted a photo featuring the film's crew as they worked on the busy set. The scene they were working on was being filmed indoors. Along with the photo, he wrote, "#shootlife #rockyaurranikipremkahani." 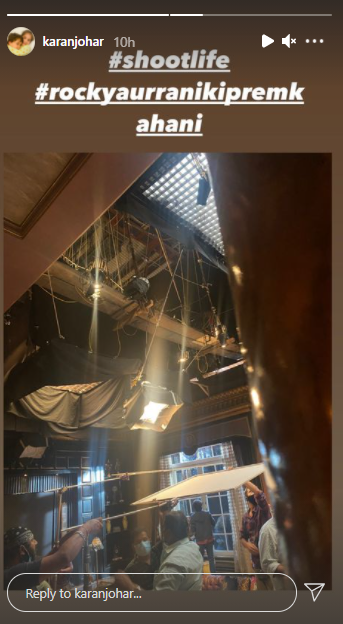 'Rocky Aur Rani Ki Prem Kahani', starring actors Ranveer Singh, Alia Bhatt, Dharmendra, Jaya Bachchan and Shabana Azmi has been penned by Ishita Moitra, Shashank Khaitan and Sumit Roy. The movie, which was announced on July 6 by Karan, will be coming out in 2022.

Earlier, a first-day shoot BTS clip of the film had been released in which Alia could be seen setting the frame ablaze with her alluring saree looks and Ranveer spreading the magic with his debonair appearance. Fashion designer Manish Malhotra was also seen in the short video.

In the film, Dharmendra and Jaya Bachchan are a part of Ranveer's family, while Shabana Azmi is a member of Alia Bhatt's family.

After that, he helmed Netflix's anthologies 'Lust Stories' (2018) and 'Ghost Stories' (2020).
Apart from 'Rocky Aur Rani Ki Prem Kahani', Karan also has 'Takht' in his kitty.

Separately from his directorial stints, the filmmaker also has a number of production ventures in the pipeline.

He will be producing Akshay Kumar and Katrina Kaif starrer 'Sooryavanshi', along with Ranbir Kapoor-Alia Bhatt's 'Brahmastra'.

Karan is also set to launch South sensation Vijay Deverakonda in Bollywood with 'Liger', which stars Ananya Panday as the leading lady.