Global star Priyanka Chopra Jonas on Friday shared a selfie in which her cheek and forehead are smeared with bloody wounds. Along with it, she dropped the question for her fans to figure out which of the wounds were real.

The picture, posted on her Instagram Story, was taken from the sets of 'Citadel', her upcoming spy series currently being shot in London.

Along with the hard-to-look-at-photo, Priyanka wrote the question, "What's real and what's not". 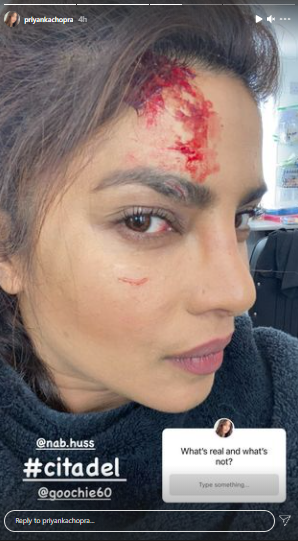 In the follow-up Insta story, 'The Sky Is Pink' actor revealed that the scar on her eyebrow is real, while the blood-marks on her cheek are fake. 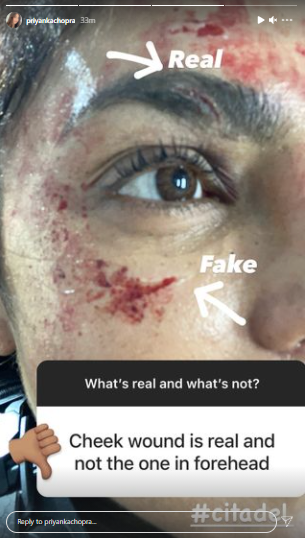 'Citadel', the Amazon-backed project is being helmed by the Russo Brothers. 'Game of Thrones' star Richard Madden is also a part of it.

Priyanka will also be seen in 'Text For You' which includes Celine Dion and Sam Heughan in the lead roles.

Apart from that, she will also be seen in 'Matrix 4' and the recently announced Bollywood film 'Jee Le Zaraa', which will mark actor-filmmaker Farhan Akhtar's return as a director.