Celina wrote, "I have always wondered what @priyankachopra and I were thinking when we did this shoot back then lol...It seems we were either very cold or superhero action figures forced to pose like dolls. #Throwback #CelinaJaitly #PriyankaChopra." 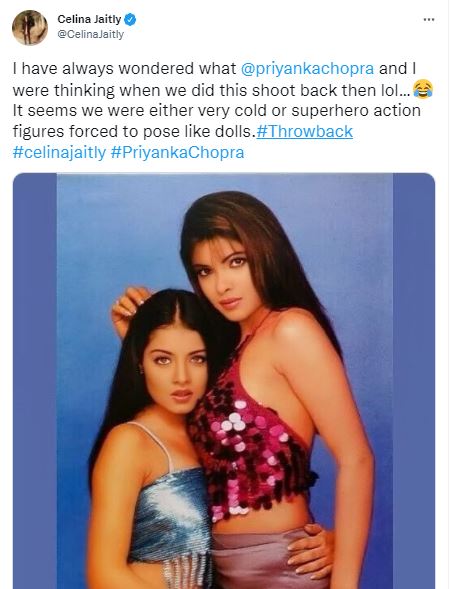 As soon as she tweeted the photo, fans started commenting on the tweet.

While one wrote, "Hahaha! This is great," another commented, "It's funny pose btw you look gorgeous."

Priyanka and Celina has participated in beauty pageants before making their debut in the film industry. While Priyanka was the winner of the Miss World 2000 Pageant, Celina bagged the title of Miss India in 2001.

On work front, Celina was last seen in 'Season's Greetings', which was released in 2020. Priyanka has several projects in her kitty, such as the Amazon Prime Video series 'Citadel', romantic drama 'Text For You', action film 'Ending Things', and the Bollywood film 'Jee Le Zaraa', which stars Katrina Kaif and Alia Bhatt.